Is there a non-green beauty or personal care product you just can't give up?

For me, it's Urban Decay eyeshadow. The ingredient lists look like they're written in an alien language (except for the parabens, which I can actually make out). But the textures are top-notch, the colors are unique, and the brand is so fun and edgy. I know Urban Decay is committed to making their products animal- and vegan-friendly, and I hope that in the future Urban Decay will figure out a way to weed out some of the questionable chemicals in their products and include more natural ingredients. Until then, I'm stuck with my guilty pleasure and looking half-heartedly for the next best thing.
Posted by Lauren at 3:34 PM No comments:

I can't say that I'd ever want to be a celebrity. I really enjoy the simple life (yeah, the one without Paris Hilton and Nicole Richie). On an average day you're more likely to find me watching Real Housewives or beauty blogging that out at events. But every girl wonders what it's like to hit the red carpet in a beautiful gown...and Tarte Celebutante ($34/1.8oz.) is perfect for moments when you want to be noticed. It's a dry-oil shimmer spray designed to give skin a healthy glow. The product is thin and spreads easily, so it's not greasy at all. I love dabbing some on my collarbones, arms, and gams before a night out. It's way sexier than baby oil! 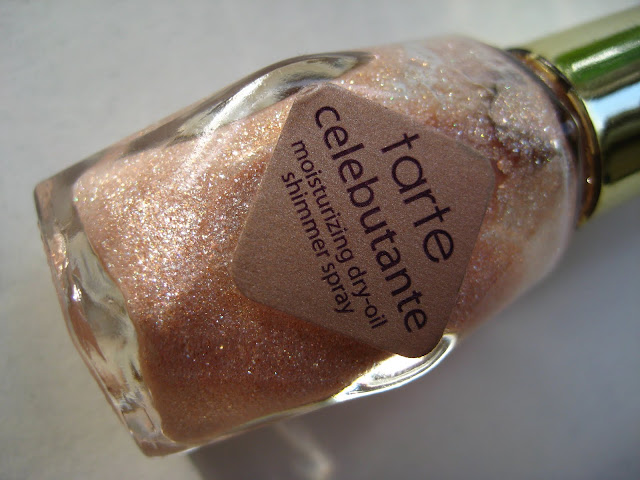 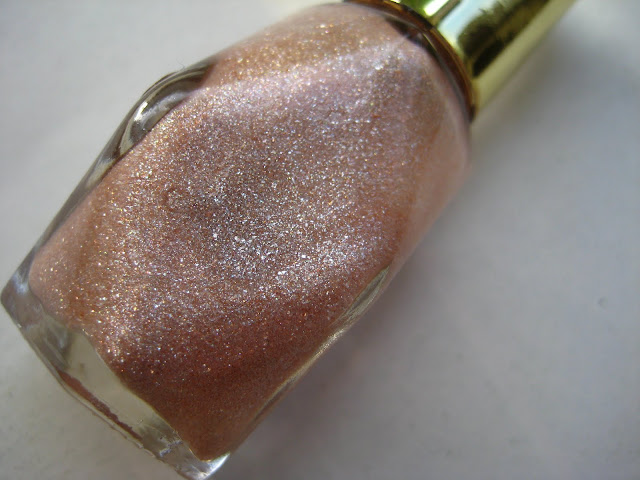 Check out that shimmer! 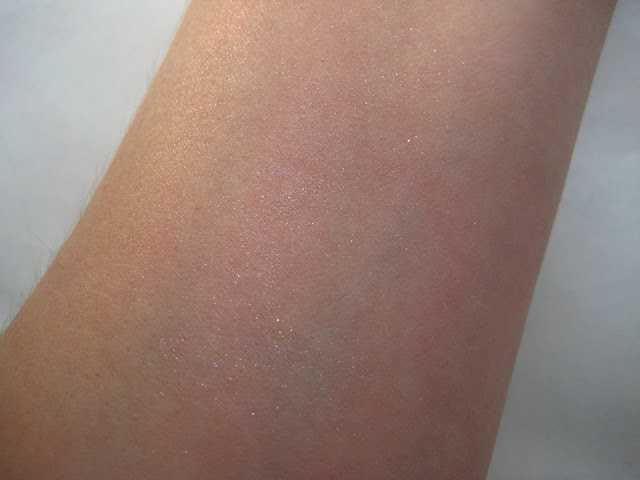 Tarte Celebutante has a noticeable coconut scent that lingers after application, so if you have a sensitive nose you may wish to steer clear. If you're a fan of coconut, slap some on, close your eyes, and dream yourself away to your favorite tropical destination. It's a little expensive for how much you get, but a little goes a long way. I plan to a dupe using some coconut oil and an old box of Guerlain Meteorites...I'll let you know how it goes!

Overall, I love the formulation, performance and scent but the price is a deterrence. So, I give it an A-.
Posted by Lauren at 9:38 PM No comments: 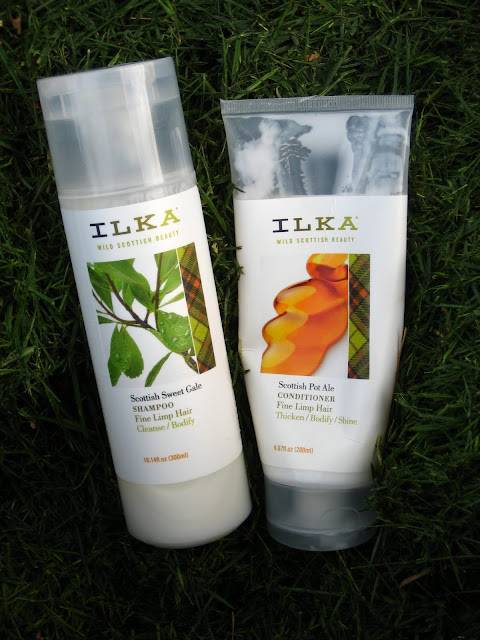 You know I love a deal, and when I came across this cute shampoo at conditioner set at TJ Maxx I thought, "Hey, what the hell?". Little did I know. I'm not sure I've ever been more passionate (passionate!) about any other hair care items.
This shampoo and conditioner are part of the Scottish hair care line ILKA, which was developed by couple Irvine and Louise Rusk of the Rusk hair care line. ILKA offers shampoos and conditioners for three different hair types - Coarse and Thick, Fine and Limp, and Color-treated - and features natural ingredients harvested in the Rusks' native Scotland.
I held off on posting about these because after some initial research, it seemed that ILKA had gone under...or at least gone M.I.A. It's pretty common for discontinued products to end up at TJ Maxx, so I didn't want to trot them out in case someone else fell in love with them, and their love was unrequited. But after a secondary investigation (via http://www.google.co.uk, dear Watson), it seems that ILKA is still on the scene and preparing to break out. They have a website coming soon, and the buzz on the internet is that they're planning to re-launch soon.
My hair is thin, fine and straight, so I picked up the Fine and Limp shampoo and  conditioner. The star ingredient in the shampoo is oil from the Sweet Gale plant, which has traditionally been used in Scottish skin care products and in the brewing of beer. The conditioner features pot ale (residue produced in the distillation of whiskey). The Sweet Gale oil moisturizes, and the pot ale lightens hair by stripping residue leftover from other products. Like Batman and Robin, this pair fights frizz and dullness to leave my hair sleek, shiny, and volumized. A girl really can have it all.
I'm excited to hear more about ILKA and figure out what their line will be priced at. Until then, I'm rationing!
Posted by Lauren at 11:38 AM 1 comment:

Also a Walmart find...EOS Everyday Hand Lotion ($4/1.5 oz.). I am big fan of EOS products, and was excited to stumble upon more items from the line (I wonder if Walmart carries EOS's shave creams too?). EOS offers two versions of their hand lotion - Nourish and Refresh - but my local Walmart only carried Refresh.  So, that's the one I came home with! Behold... 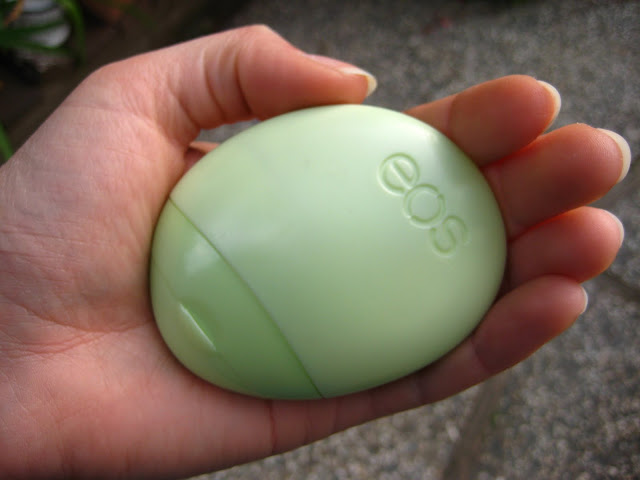 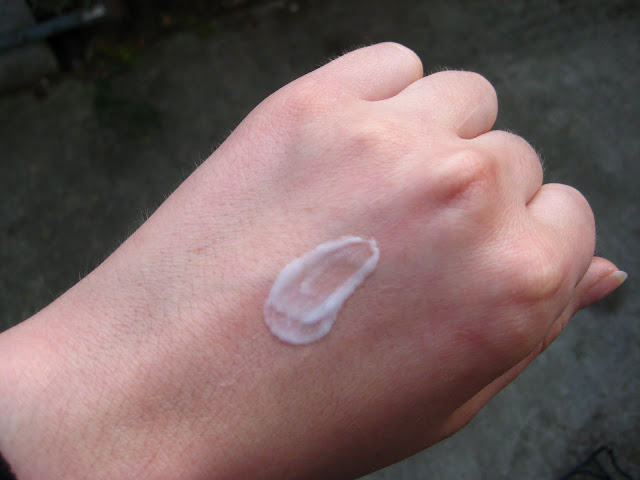 Refresh is packed with natural oils, shea butter, and Aloe Vera to moisturize and soothe skin. EOS claims that Refresh has a "cucumber" scent, but to me it smells more like a sweet slice of melon (pretty much the same scent as the Honeysuckle Honeydew Smooth Sphere lip balm). According to EOS's website, Nourish is packed with antioxidants and vitamins C & E to protect and rejuvenate skin. No scent is mentioned in the description, so I am assuming that it's either unscented or has a neutral "lotion" scent.

The lotion is thin and soaks in quickly, so there are no worries of greasy lotion hands. It's not a heavy duty moisturizer, but for every day use (the purpose it's marketed for), it's great. The bottle is thin, flat, and soft - perfectly designed to fit in tight spaces like pant pockets. Considering what this product claims to be and do, I give it an A (gold star)!
Posted by Lauren at 10:03 AM 1 comment:

So I was at Walmart this weekend, and while I fully expected to encounter shoppers with mullets and ill-fitting clothing, I did not expect to find an awesome new line of cosmetics called geoGirl!

geoGirl's website is currently under construction, but there is a little buzz about the brand around the internets. Based on the research I've done, geoGirl is a Walmart brand of cosmetics aimed toward girls ages 8-12. I'm about 10 years out of that demographic, but I was instantly pulled in by the brand's cute packaging (cannot deny a lip balm with ladybugs on the tube) and natural ingredients. The display at the store claimed that 92% or more of the ingredients in each product are naturally-derived.

I picked up two lip glosses and a lip balm...and they are available for your viewing pleasure below ;) 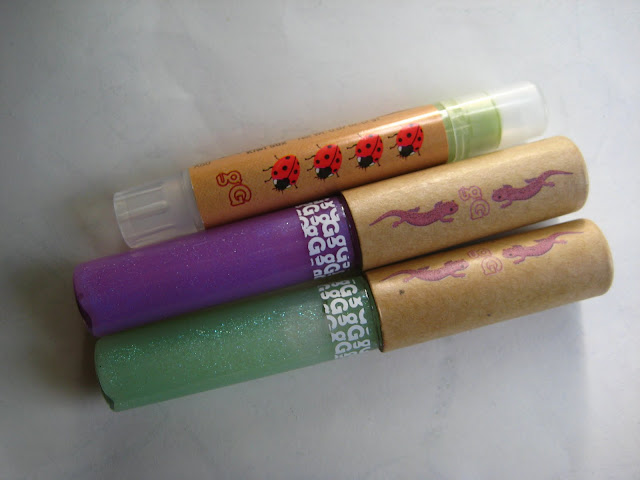 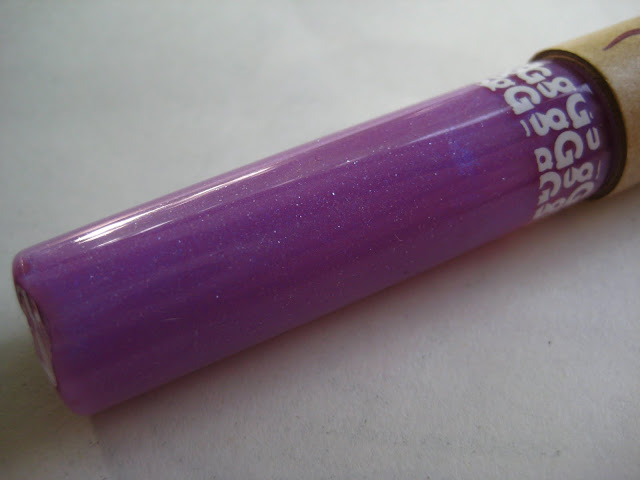 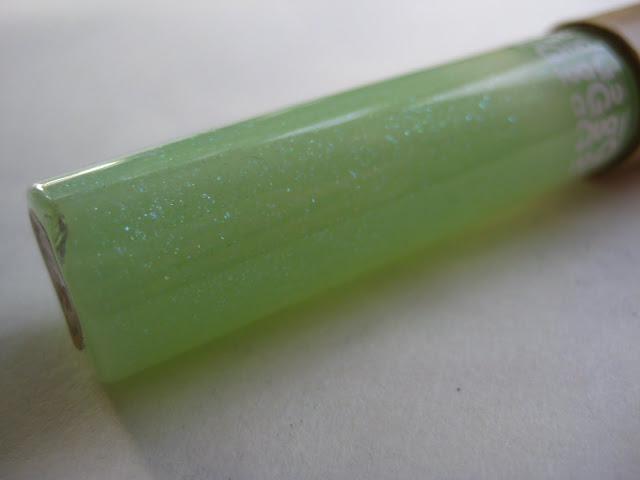 VBS Lip Gloss in Sub-Lime
Pictured above are geoGirl's VBS (Very Best Smile) lip glosses ($4 each) in Raspberry and Sub-Lime. Raspberry is a sheer purple-y shade with blue shimmer and a berry scent. Sub-Lime is a sheer green gloss with blue-green shimmer and an awesome lime scent. I am a fool and threw away the packaging (which by the way, was eco-friendly recycled cardboard), but I do recall that the first ingredient in the lip glosses was Camellia sinesis (Camellia) oil. The oil base makes the glosses thin and moisturizing with no stick factor. The pigmentation is minimal, but that makes sense for a line geared toward pre-pubescents. And can I really hold that against the glosses when they have cute little purple lizards on their caps?! 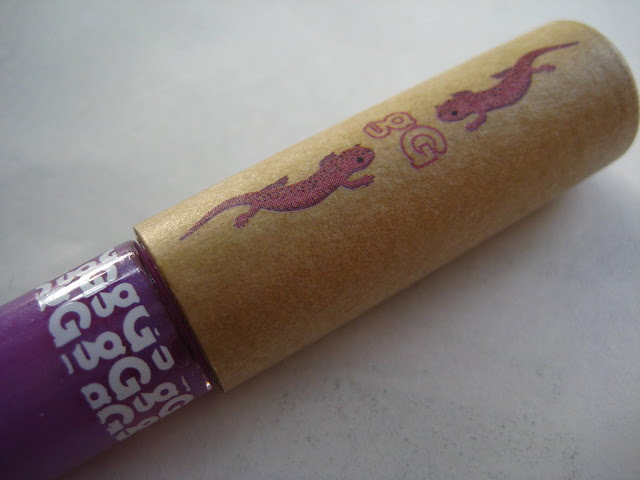 Enhance!
In addition to the two lip glosses I picked up a geoGirl lip balm in Kiwi ($4). The balm itself is green and when applied has a veeery sheer yelow-green tint with a tiny bit of shimmer. To me the balm smells more like green apple than kiwi, but I dig it :) The tube is skinny (similar to Burt's Bees Lip shimmers, but thinner). This means I don't get an entire lip in one swipe - I have to go over a second or third time to get everything covered. But again, the products are meant for young girls, and the applicator is probably well-suited for little lips. 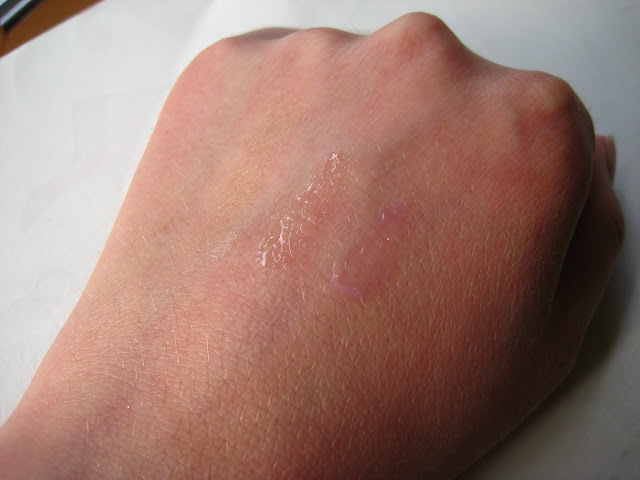 Now swatch it out...from L-R: geoGirl lip balm in Kiwi, VBS lip glosses in Sub-Lime and Raspberry
Overall, I give the line a solid B. The price, product packaging, and line vision are great, though the products are very sheer and don't have much *oomph* on. Looking forward to picking up more items from the line on my next trip to Wally World...and I'm sure it will be a trip.

EDIT: geoGirl has gotten some less than flattering press claiming that certain products in the line are not appropriate for young girls. Namely, the media has called out cleansers and exfoliators...but I didn't see any cleansers or exfoliators in the display at Walmart. Maybe it was a partial roll-out, but I guess time will tell. Intrigue. Regardless, I still feel positive about the brand and the products I bought.
Posted by Lauren at 8:21 PM 2 comments:

So I know that lately I've been reviewing a bunch of skin care products, but finally here's a product that bridges the gap into the makeup realm - Korres Lip Butters ($10) In this post I'll show off Mango (a sheer orange) and Plum (a cool plum), but Korres also offers their lip butter in Pomegranate (coral), Quince (fuschia), Jasmine (very pale pink), and Wild Rose (cool raspberry) .

As I've said before (and feel obliged to say again!) Korres' packaging is great. They use vibrant colors and cool images, which I think make their products feel more fun and luxe. The lids of Korres lip butters correspond to the color of the product inside, so if you own a few of these little guys it's easy to tell them apart. As for the lip butter itself, it's a highly pigmented balm made with shea butter and rice wax to moisturize and protect lips. Most of the lip butters have a sweet, fruity scent that tends to stick around after application. I love Korres' lip butters because they provide moisture and a pop of color at the same time.

Each container of Korres Lip Butter contains about 6g or 0.21oz. of product, which lasts a long time since the lip butter is so pigmented. I tend to be thrifty, but I can definitely justify shelling out a Hamilton for one of these.  A con for this product is that the lip butter is packaged in a tub, so you have to dip your finger into the product in order to apply. I don't mind the tub, but I think a tube would be more sanitary, less messy, and more convenient for precise application. Korres, please release the lip butters in tubes? I know you would make a killing on them..... 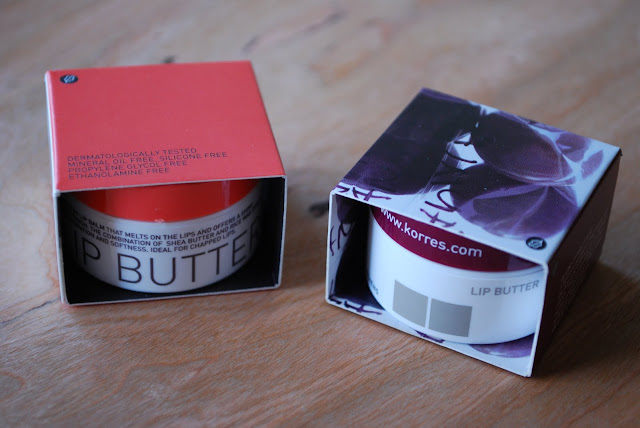 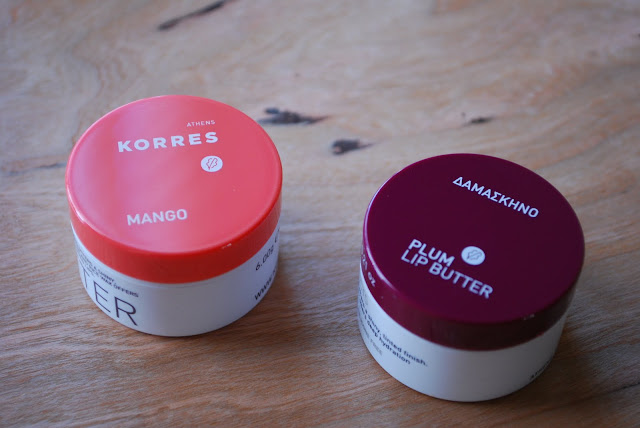 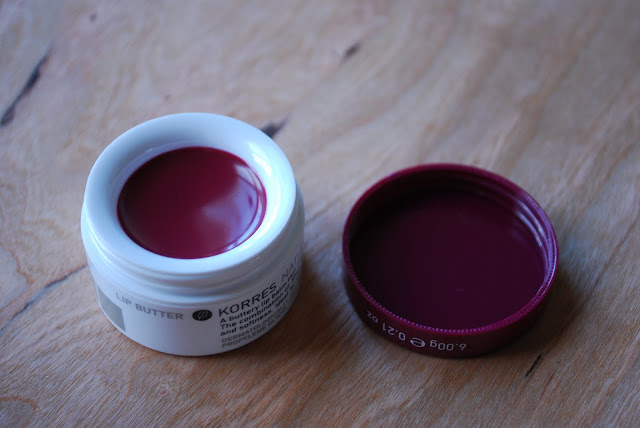 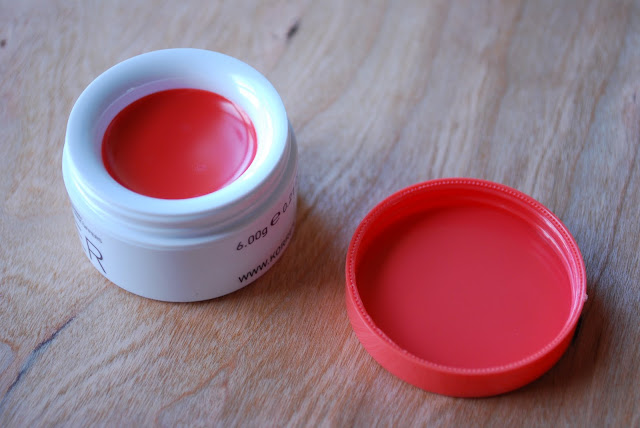 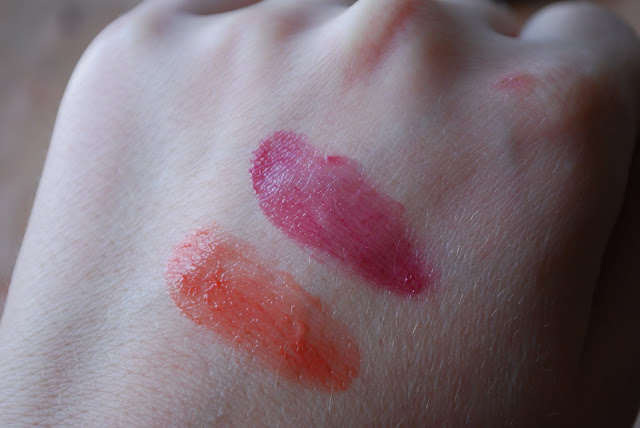 Swatches: Mango on the bottom left and Plum on the top right.
Posted by Lauren at 8:35 PM No comments:

Lauren
I am a California girl with an interest in beauty and wellness. My 2010 New Year's resolution was to replace my personal care and beauty products with products containing more naturally-derived ingredients, and this blog is an extension of that endeavor.